People’s relationships to places have been widely explored by anthropologists, debating whether we can approach people as rooted within a territory or if connections between identity and territory are merely social constructs. Following Hevin, Mohamed and Mireille, who all came to the Danish city of Randers after fleeing from their homelands, Syria and Congo, my project revisits the debates relating people and place.

In the film, Far away from Syria, Mohamed is the narrator, recollecting experiences of living in a war zone, fleeing from his homeland, arriving to Denmark, and waiting around in a Danish asylum centre. Mohamed’s narration is based on a manuscript of Mohamed’s story, articulated by him, put together by me, and jointly edited. Mohamed’s story is visualised through found footage, moving images, and Mohamed’s own photographs of his migrational journey, and of the two Danish asylum centres where he stayed. In conjunction with Hevin’s, Mohamed’s and Mirelle’s photographs of their lives in Randers, the film aims to provide an understanding of how the experiences of fleeing and uncertain living become inherent parts of the experience of resettling.

My mother was the first person to decide that I should travel out of Syria, because the situation in Syria is very dangerous for young men. They are either taken to be in the military for the government or the revolutionary army or they are locked in prisons. I lost too many friends in Syria. They could not escape or run away from the war. I arrived in Denmark the 27th of June, 2014. It was a very hard trip. Some people collapsed on the way. I guess it was all about arriving. This was our last hope.(Mohamed). 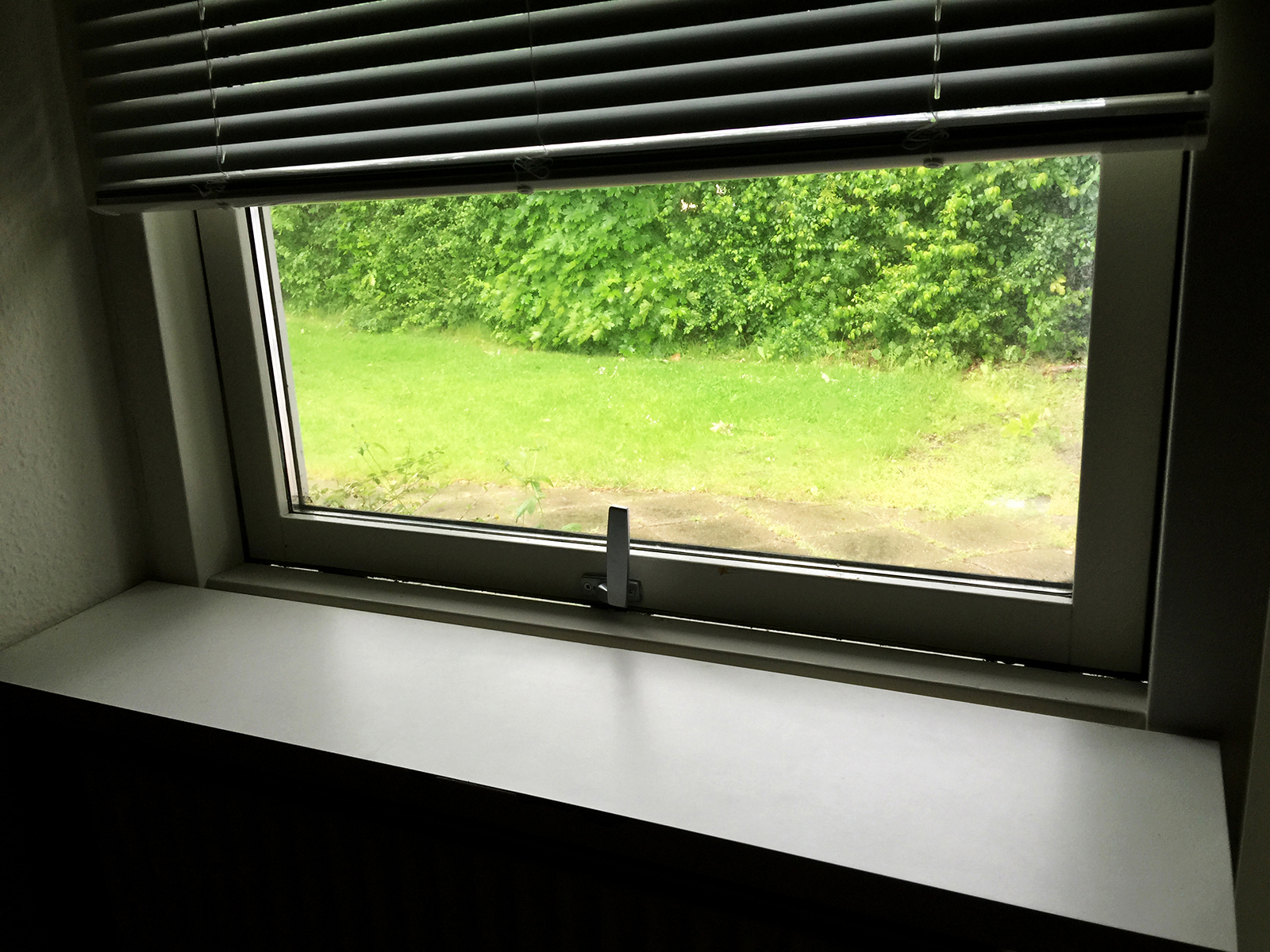 Usually I sit here. I have a small garden outside, and it keeps me thinking about Syria, because it is the same weather and nature sometimes. There is an old Syrian guy who came to Randers, and he has his family with him. Me and some of the guys here go to visit him sometimes, and when we gather around all of us Syrians, it feels like home and being connected to the old life I had. (Mohamed).

This is where I live. It is a temporary place, but it is quiet and it is good for me, because I live alone. This is from the outside, but it shows almost how clean and how organised the houses are in Denmark. I lost my home in Syria, but for now I am starting a new life, so this is my new home. I can see myself staying in Denmark. This is a new life, and I am building it from the beginning, from zero. After what I lost in Syria, I do not want to lose another life I have built here. Of course I will come back to Syria when it is peaceful again, and there is no more war, but I will always be the guy who lived in Denmark and have some of Denmark inside of him. (Mohamed).

The place I feel most at home is my apartment. There, I talk with many of my friends on the phone and on skype. After a long day, I do not have anywhere but my apartment to go, so it is home for me. (Mohamed).

This is the picture inside the school, a class called integration class, where we should study on computers. I spend most of the time at the school in this room. It is my source to anything in Danish. It is my library - my Danish library. Like any other human, I have dreams and I have goals to achieve, so my education right now is the most important thing for me. I do not know where I will be without my education. To get that, I need to learn Danish and I need to be part of the Danish society and be working like any other young Danish man. (Mohamed).

I was going for a walk in the morning before I went to school, and I saw this. It is a weather that we do not have in Syria, so it was kind of a new thing for me. I have been here for a year, and still sometimes I do not feel like I belong to this city. In a big city you get many chances, many choices, you can do a lot of things. I lived my whole life in a big city with seven million people. Living in a small city is quiet and good, but still I need more opportunities. I am young, I do not have anything to lose. I visited Copenhagen once, and I know that it is going to be what I want. I saw life. I guess because I am looking at Randers as a temporal place, it will always be in my mind that it is a temporal place. I need to feel that it is where my life is going to be. My work, my life, my family for example. This is where I should settle. When I get that feeling, then I would know that I belong there. (Mohamed).

I had a lot of friends in Syria and we were happy together. I miss my brother’s daughter, who I took care of, and I miss my village. But in Syria I always thought I was like a dead person, because there was no life. Everything was difficult. When the bombs fell, the walls would shake. There was a lot of death. Dead people and dead children. When we fled, we ran for eight hours and we crossed the sea in a boat. My ankle bled and it bled from my thigh. We cried a lot. The worst thing was hearing the children cry. In Denmark, I feel alive. I feel I have a body, I am a person. I am not dead. In Denmark, I feel it is alright and I have a future. (Hevin).

I like that the bus has a system. It is not like Syria. In Syria there is no control and no system. When I sit in the bus, I always think about my first time in Randers. I was a bit uncomfortable and scared because I did not speak the language. What should I do, if I had problems? I live alone and I did not know how to take the bus, so everyday I walked from my apartment to the language school. (Hevin).

I have a lot of memories from my apartment. The first time I came to my apartment, I was happy because I had an apartment. I was a bit tired and a bit ill, but now I relax because I think about this as my country, as my city. I go to school and I go to work. It is okay. It is my life. I relax. I have a lot of friends and I have a future, because I know I am going to work, when I complete the language school. (Hevin).

I live alone, I eat alone and I watch films alone. It is a bit hard. I cannot learn Danish when I am alone. (Hevin).

When I am sad, I open the door to the balcony and look out over the street. Maybe I see people walking on the street or two people walking together. In the beginning, I felt very bad, but now there is hope. I think it is fine living in Denmark. Everything is different from Syria, but I like it. The best thing is the smile. When I walk on the street, there are many people smiling. It makes me feel happy. (Hevin).

I have been in Denmark for three years. After Congo, we came to Zimbabwe and then moved to Denmark. We came because we were accepted as refugees. We are very happy to be here, because it is like we get that hope that tomorrow we will live. When I sleep, I sometimes wake up at night and ask ‘am I in Denmark, or am I still in Africa?’ (Mireille).

This is our everyday life. We cook and buy groceries. It is like a plan. If you do not have a plan, you get very stressed, and we do not want to get stressed. It was not like that, when I lived in Africa, because in my homeland I only went to school, and when I was done then nothing. I just went to town and hung out with friends. I knew my mother was at home. She cooked and took care of everything, and I was busy studying. (Mireille)

I like running, but I love biking and walking. I love to go for a walk, because I feel like I come to know Randers. I hope I find a job here, even though it is difficult right now. But it will come. I just want to feel good. I want to live like you people. I want to be independent, have a job, a house, and a nice family with children. I hope I will get that in the future. (Mireille).

Here, I feel like I am independent. If I do not do it, who will do it for me? Here is no family. I am the mother, I am the father and I am the siblings. (Mireille).