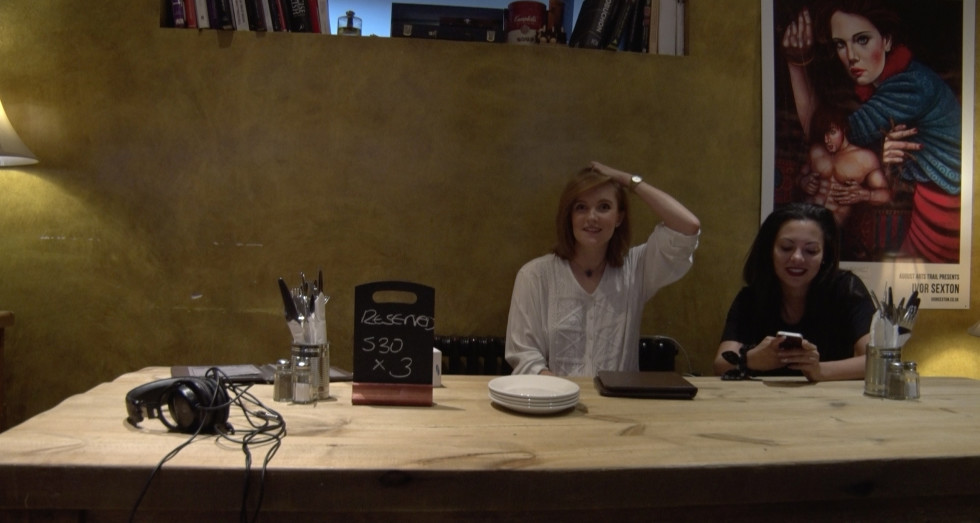 For the past month and a half all I have been doing is thinking about my film; what shots will work, what questions I should answer, how should I frame my subjects. I met up with the people who will participate in my film a few times over this past month in order to get to know them. Today I filmed them as a group for the very first time. We met at The Molly House in Manchester since the pub manager agreed to the filming and kindly let me book their sheltered table in the quiet corner of the space, understanding my needs as a filmmaker. I called James, a friend with sound recording experience, and arranged for him to be my sound technician for the evening as I was in desperate need of a boom holder.

I arrived there at 17:30, meet the guys, quickly set up the camera, and began doing test shots. The setting looked great: gentle lighting, non-distracting background, and the volunteers outfits happened to go really well with the pub’s decor. I took one look at the wide shot I tried out and was overjoyed by how aesthetically pleasing it all looked. James and I joked around with the subjects, trying to break the ice and distract them from the idea of the camera, but as soon as I told them I was going to start properly filming I noticed they became a little uncomfortable, which is normal.

In my original plan, I intended filming them observationally. I was going to let the conversation unfold naturally and just follow their dialogues without interrupting, hoping they would eventually forget about me and my camera. I figured I would let them do all the talking and jump in here and there to spice up the conversation when needed. Now, of course, I realise how unrealistic my expectations were, and I’m a little surprised I was so naive. You can’t just point a camera to someone’s face, hold a boom mic above their head, smile, and ask them to ‘act naturally’. When I heard myself asking them to ‘forget about the camera’ I realised how unreasonable my request was. It’s crazy to expect someone who has never been on camera before to ‘act natural’ just because you’re asking nicely. So I realised my observational filming plan wasn’t going to work this time. I quickly shifted to a different approach. I kept asking them questions in order for them to have a structure to follow, and I noticed that this made things much easier. I was very pleased by their answers. The filming style ended up being very far from what I had originally planned. I went from strictly observational to completely collaborative, and reflexive of both my presence in the film (as you can hear my voice in the back and forth with the participants) and of the filmmaking process itself (as I explain to them why I need them to repeat certain phrases, or include parts of my question in their answers).

Instead of filming a conversation between the three of them, I filmed a conversation they are having with me. Walking back home I was scared I wouldn’t be able to edit myself out of the interviews, but then realised I don’t have to. Not if I don’t want to at least.
I believe today we laid the grounds for more in depth research about their motivations to volunteer for Circles of Support & Accountability, and I’m really excited to do one-to-one interviews in the next few weeks. Even James, who was quite skeptical about my film topic at beginning, asked me a bunch of questions after we wrapped up. I could tell the volunteers words had began to change his outlook on rehab therapies for ex convicted sex offenders, he now seemed curious about the subject and eager to find out more about the organisation’s work. James’ reaction to the filming is the desired outcome of my film, for people to watch it and realise rehabilitation therapies for ex convicted sex offenders are essential to prevent reoffending, and incredibly important for the individual’s reintegration into society.