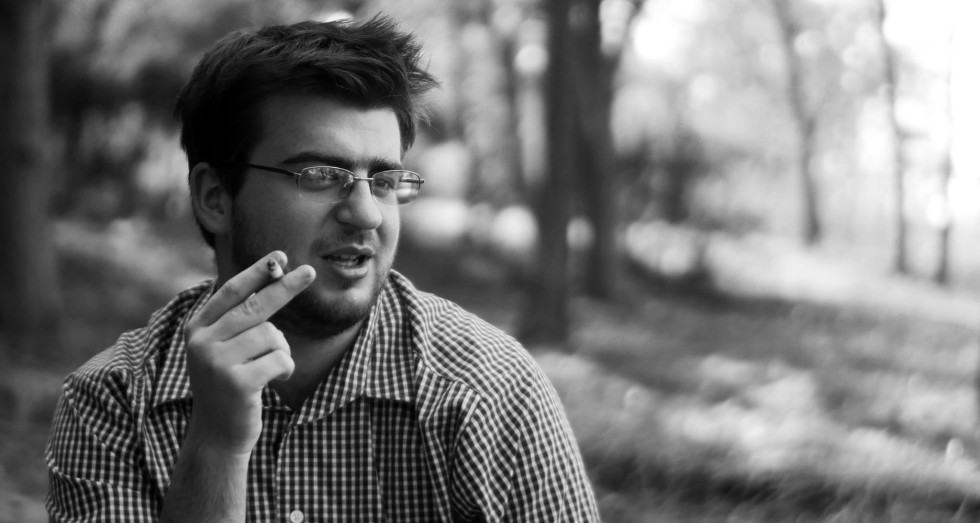 This summer, I went back to my hometown of Smederevo, a small town in Serbia 40 kilometres away from the capital city of Belgrade, in order to explore the everyday lives of Serbian youth and the challenges that they face due to decades of political, social and economic uncertainty.

Smederevo is a place that I personally have a very complicated relationship with; I was born in the UK, but my parents, who themselves left Serbia in the 90s, always ensured that I maintained a strong relationship with Serbia and our hometown, which has resulted in me dividing my life between the two countries. As the years have gone by, I’ve witnessed both firsthand and from the sidelines the complicated, frustrating and often difficult situation for my friends that live in Serbia. The group I followed this summer is comprised of young people, mainly in the 20-26 age bracket, of which they are either unemployed, studying or in work. The following is an excerpt from a discussion I had towards the end of the summer with my friend Bojan, who acted as my contact, helping me organise interviews, locations and filming. The conversation was brought about after a summer of interviews with our friends, which challenged both of our views on how things are and the reasons why. Here we are discussing the political context for the current situation for young people in Smederevo.

Smederevo…. What can I say about Smederevo. If you want to prosper or make something of yourself, then you need to leave. Anyone that has stayed here hasn’t had the ambition or opportunity to leave and progress. The young adults in this town, the ones that have finished high school and stayed here, they have no ambitions, or opportunities. Here, in this town, if you’re young you have pretty much a 90% chance of being frustrated and unsatisfied. You’re left without prospect or opportunity

This city’s economy is dependent on the steel factory, thousands of families depend on it; if the factory is prospering, then there is money, if it isn’t, well… eh. Smederevo, and Serbia as a whole, isn’t really a contender in the metal industry. I think that in 5 or 10 years, when the factory is closed, Smederevo will completely fall apart. Instead of developing in other areas, other industries, whatever, we keep clinging on to this failing industry, as though it’s easier to reanimate a dead corpse than to nurture a small child and make something of them. We keep grabbing at rotting straws and neglecting the new grass that is yet to grow. No, no one is looking after it, because ignoring the rot is just easier.

Finding a job around here… I mean, I don’t particularly want to talk too much about this, but finding employment around here is ridiculous. You’re pretty much only going to get a job if you join a political party. For example, one of my friends had to join the town’s current party and hand out their flyers for a month to get his job, flyers for a party that at the last election campaigned ‘against’ political discrimination and nepotism in employment. Another friend who was recently hired, I won’t say where, the conditions for the job were that they and their whole family join the party and vote for them, even though they have a degree in the field and have every right to the position. Those are just two examples of stuff that happens every day; it’s completely normal to be employed through ‘connections’ here. And no one protests it. No one is grabbing their head asking “oh my god, how is this possible?”; the opposite really, we laugh about it. But it absolutely isn’t funny, it’s just sad, what can I say. Our mayor is a criminal, she gave disability pensions to people who aren’t disabled, and was sentenced for it. And now she’s our mayor, and she has political connections and supporters in government, and probably won’t ever end up in court, regardless of all the evidence stacked against her. I mean, what can I say about a town when we have these sorts of people in power? When our politicians screw about with the law a million times, and then you ask me to tell you about Smederevo… well there you go, that’s what it is. 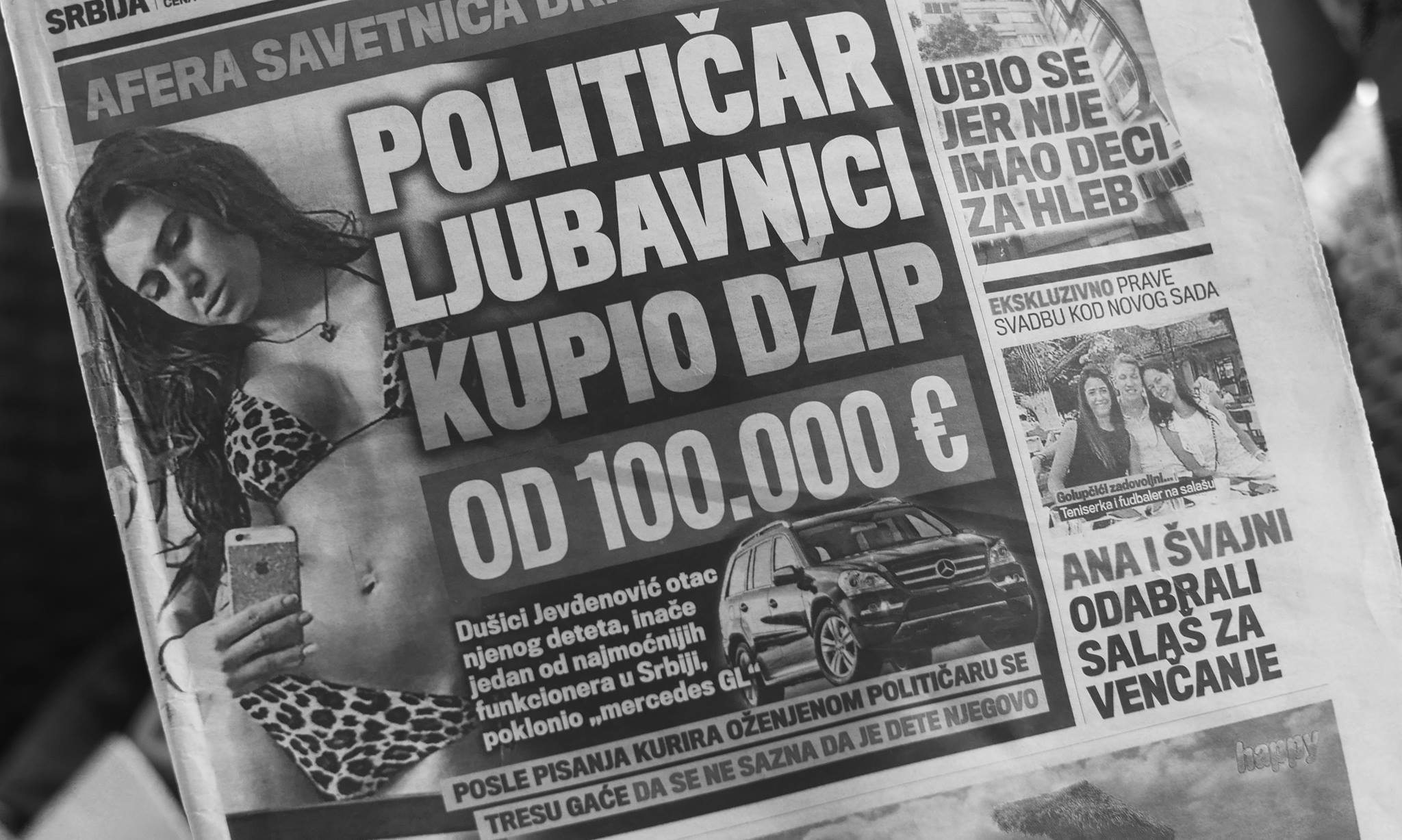 Example of an average newspaper front page, on the left “Politician gifted mistress 100,000 euro Jeep – one of the most powerful officials in Serbia, who is the father of his misstress”s daughter, “gifted” her a Mercedes GL”, on the right “Man kills himself because he didn”t have enough money to buy his children bread.”

Nobody fights it or protests anything. Why? My generation has seen that fighting just isn’t worth it, history shows us that when you get rid of someone, somebody even worse comes along. When I was a kid, when people were protesting on the 5th October against Milošević, I was out there, shouting, screaming, giving myself a temperature, crying because my dad wouldn’t take me to Belgrade to protest with everyone… then, to catch myself 15 years later thinking ‘hey, that Milošević wasn’t so bad’… well then you just don’t feel well or good. We demonstrated for 10 years, and nothing. Everything is the same, if not worse. Demonstrations and protests should last two months, but here you had people constantly demonstrating every day, every night, pounding on tables and pots and pans at 7.30pm every night when the news came on. That was our every day and nothing changed. You can’t expect to pull some fighting spirit out of anyone after that. People should just watch themselves and their own happiness.

The bombings destroyed a lot of factories and left the economy screwed, but this civil war has left a massive problem with interpersonal relationships amongst the old republics of Yugoslavia. You know what the real problem is? I don’t think it could have been any different. We can’t decide or change anything, not Milošević, not anyone; someone out there in a “more important” country decides how to divide Europe and that’s it, we’re just left in a f**king bad way, left to hate one another.

What everyone achieved in 2000 is massive, but nothing changed. Why? because the underlying structures didn’t change. In ’44, when they arrived, the ones in power, their kids are now the ones in government. They racked up capital as socialists, and now they’re still the same, just running on capitalist principles. When they arrived in Belgrade, they didn’t arrive to “liberate” Belgrade; they saw Belgrade as their war plain. If you’re arriving as a liberator, you shouldn’t view it that way, otherwise everything just falls apart.

I never thought I would be this negative. I really thought I would say something positive. But is there anything positive to say? But, you know what? They can’t ever be above you. When they put you in that situation, and you feel so miserable, then you may end up just as rotten as they are.