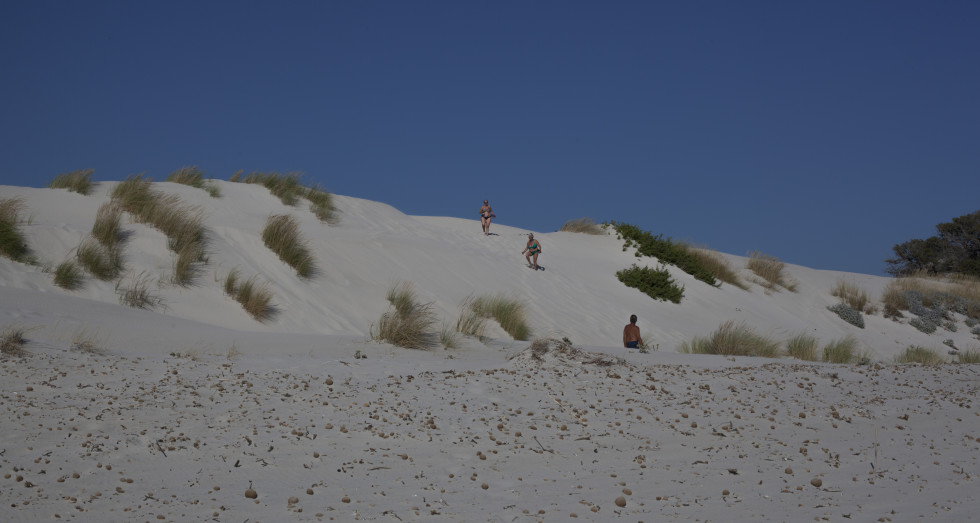 Day 12 around Teulada, extreme south of Sardinia, Italy. Here, I am closer to Africa than Europe. You can tell from the birds that I have never seen wild before in my country, like hummingbirds, flamingos and storks. The heat is constant and at lunchtime the earth burns.

Today I ate bread with ricotta dried tomatoes, which were as salty as the sea water. I have been exploring another military beach. During the summer, in fact, some of the beautiful pieces of coastline located inside Teulada testing base are opened to tourists and locals. The war practices are stopped for three months. To get to the beaches you need to drive along few kilometres of dirt track that is signed by tanks’ tracks so deeply that my car shakes. The way is framed by a high, seemingly endless fence topped with barbed wire. So far, going through the base I have met a solitary chicken, some cows stubbornly sitting in the middle of the road, a herd of goats, a few shepherds riding old motorbikes and vespas and one wall filled with rounded holes.

Sometimes I explore the underwater space in the military base, trying to overcome my fear of the unknown sea, with the hope to discover some artefact, perhaps a missile or projectile at the bottom. I didn’t find anything so far, but I will buy mask and flippers to dive deeper. My participants told me that the militaries cleaned everything up because last summer a journalist on holiday wrote an article about the missiles on the beaches and they didn’t like that bad press. When I asked Mariella, one of the people that I met here, if that meant I could explore inland, she told me yes, that I could, but still risked to be blown up by unexploded bombs.

Teulada is the only base in Sardinia where the military forces can fire from the sea to the land. There are two red faded signs on the beach. ‘Military zone, keep out, unexploded devices’. You can barely read it. I decided that it didn’t matter and so I started walking on the sand dunes. After rolling my body down them I noticed that the first action this environment led me doing was playing as a soldier between the dunes. Hiding myself behind them, running toward the enemy and then jump and roll over and then hide again. It was a sinister thrill. I did it for a bit and then I took some big black stones and I wrote, big, capital letters in the sand NO BASI (no bases).

It was really windy and possibly my silly and childish attempt of antimilitarism is now covered by sand. What remains instead are the words of the people I met. During the winter, when tourists leave back to their cosy apartments, Angela’s windows shakes because of the explosions. She has cancer, though fortunately she is recovering. The laundrette around the corner used to be run by a family where they washed military uniforms. The entire family now have cancer. Tomorrow morning I will meet Elisa. Her house is located beside the military fence. They have fruit trees in the garden. Her husband has cancer.

‘No du bollu biri manco pintau’ is an old Sardinian adage which means that you don’t want to see, even if it is painted. Mariella told me that this expression is used when you really dislike someone and you don’t want to see them. She said that it is the same with the bases. No one wants to see what is right in front of them. Aware of this, being inside the base felt sinister. I didn’t know what was underneath my feet, and walking I had the feeling of being scorched and swallowed by the hot shifting sand. Yet tourists and locals happily sunbathed and played on this battleground, ‘No du bollu biri manco pintau.’